She has blue hair tied in a right-sided ponytail, causing her to resemble Amika Hashimoto, Kiyoi's last Selector who looked like her deceased friend Ayumi Sakaguchi.

She wears a two-piece with cape skirt, as well as a crown on her head. Her current level during battle is shown by the number of wings she has.

Allos Piruluk is a strong-willed, friendly LRIG. In Lostorage incited WIXOSS, she initially appears to have inherited Kiyoi Mizushima's cold and quiet personality. Despite not speaking much, Piruluk is also apparently willing to purposely take damage and lose battles on purpose in order to help Kiyoi.

However, in Lostorage conflated WIXOSS, Allos Piruluk's personality becomes more developed. She cares a great deal about her Selector, Kiyoi Mizushima and is willing to do anything to help Kiyoi grant her wish, however, she herself has stated on multiple occasions that she will not go along with any acts that she deems are suicidal. She also shares some traits with Amika Hashimoto in that she is rather friendly, level-headed and quite cautious and calm during battles. Allos Piruluk also has a lot of faith in her comrades and seems to dislike Selectors like Akira Aoi who use battles to abuse others.

Piruluk first appears in Episode 8 battling alongside Kiyoi against Hanna. She appears to have many of the same abilities that Kiyoi once had as a LRIG.

In Episode 10, Kiyoi activates Piruluk's "Peeping" skill to use it against Kou Satomi. After peeping into his heart, Piruluk collapses, completely and horribly disturbed and disgusted by what she finds. She then tells Kiyoi that Kou's heart has only pitch-black darkness and emptiness inside of it.

After Kiyoi won by surviving the time limit, Piruluk disappears along with Kiyoi's memories of Ayumi Sakaguchi.

Kiyoi is Piruluk's Selector. She reminded Kiyoi to use her coin for bet, to activate her Peeping ability, which is shown to have similar effect with Peeping Analyze. She is shown to be quiet LRIG that accepts whatever her Selector's plan is, even losing on purpose.

During her battle against Carnival, Kiyoi activates her "Peeping" to use on Kou Satomi. After peeping into his heart, Piruluk is disgusted and horribly disturbed by what she finds. She then tells Kiyoi that Kou's heart has only pitch-black darkness and emptiness inside of it. 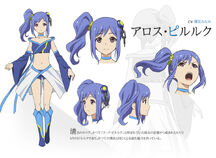 Character Design
Add a photo to this gallery

Retrieved from "https://wixoss.fandom.com/wiki/Allos_Piruluk_(Lostorage)?oldid=80216"
Community content is available under CC-BY-SA unless otherwise noted.