Ayumi has long hair, often styled in a left-side ponytail.

Ayumi has cheerful and bright personality, making her popular. She admits that she's very pushy and stubborn. She keeps on trying to befriend Kiyoi despite the latter giving her the cold shoulder. She believes that Kiyoi will be her friend if she keeps chasing after her with love in her heart.

It was revealed that although Ayumi has a lot of friends, Kiyoi is the only one she talks about so much.

Ayumi and Kiyoi are classmates, and she first noticed her when their eyes met. She started a conversation, and is happy when she knows that WIXOSS Novel's second book is out. She asked Kiyoi to lend her novel and offers her WIXOSS battle as well as friendship. Ayumi repeatedly tried to befriend Kiyoi and get her into playing WIXOSS, but Kiyoi rebuffed her. Tired of dealing with Ayumi's stubbornness, she promised her that she would play WIXOSS, just once. After building a deck, she met Ayumi's clique and began to distrust Sakaguchi even more. She decided to run off, which led her into the path of a speeding truck. Ayumi pushed Kiyoi out of the way of it, which hit Ayumi and put her into a coma. Feeling guilty about doubting Ayumi, Kiyoi wished to save her from her condition, and Remember appeared to her, causing Kiyoi to become a Selector.

Kiyoi later became an Eternal Girl, and became a LRIG named Piruluk. Unfortunately, Remember, in Kiyoi's body, cuts off Ayumi's life support and, in a way, saves her from her condition. Piruluk is devastated and vows revenge on Remember. As Piruluk continued to battle amongst other Selectors, including Akira Aoi, Ayumi's death kept haunting her, which only takes a turn for the worse after she meets Amika Hashimoto, a girl who resembles Ayumi.

After Kiyoi returns to her human body, it is shown that she and Amika visited her grave. Kiyoi gave her a flipped LRIG WIXOSS card whilst Amika put a handkerchief below it.

Ayumi liked Kiyoi and wanted to befriend her due to their shared interest in WIXOSS. She succeeded in making Kiyoi drop the honorifics, although not quite in the way that she had intended. She was in a coma after saving Kiyoi from a truck, but died after Remember (in Kiyoi's body) switched off her life support. 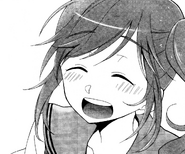 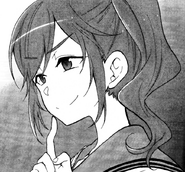 Retrieved from "https://wixoss.fandom.com/wiki/Ayumi_Sakaguchi?oldid=92700"
Community content is available under CC-BY-SA unless otherwise noted.