It's implied that Bure used to be a human before becoming a LRIG. She became the LRIG of the, then human, Alfou. Eventually, Alfou was able to become an Eternal Girl and swapped bodies with Bure. Her wish was to be with her forgotten childhood friend, Yuragi Kurosawa forever. In order to make her wish come true, Bure sent the LRIG card to Yuragi while she lived in Alfou's ill body.

Yuragi eventually finds the truth about Selector battles. She is angry that Alfou lied to her and throws her LRIG card away. Shortly after, she encounters Bure. Bure tells her about Alfou's past as a lonely ill girl and her wish to be with Yuragi. She also tells her that she doesn't mind being in Alfou's human ill body, since Alfou was earnest about her love for Yuragi and never wished to hurt anyone.

Alfou was the master of Bure. 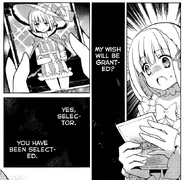 Alfou and Bure, as Alfou becomes an Eternal Girl
Retrieved from "https://wixoss.fandom.com/wiki/Bure?oldid=54723"
Community content is available under CC-BY-SA unless otherwise noted.