Guzuko has a timid personality and the habit of often saying apologetic words such as "I'm sorry" or "Excuse me", due to Sumida's constant verbal abuse. However, despite her timid personality, she will occasionally try to scold Sou, when he's doing something that she thinks is wrong.

In Lostorage incited WIXOSS, she fights alongside Sou through many of his battles and shows disapproval for his bullying weaker opponents. After Sou loses his last coin, she takes over his body. After taking over Sumida's body, she becomes Kou Satomi's errand girl.

In Episode 10, Guzuko along with Aya, follows Shohei and Chinatsu to record their interactions for Satomi's entertainment. In the final episode, Guzuko is seen hanging out with Aya again, while Rio Koshiba is playing with her friends nearby.

She is Sou's LRIG. He is very verbally abusive to her, despite her attempts to quell his temper and make him see reason. Also despite the verbal abuse, it doesn't look like she hates him.

After taking over Sumida's body, she is seen running errands for the bookmaker. 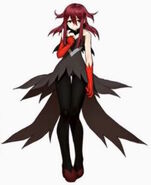