Mel has long light green hair that's normally tied up in a ponytail. However, when she grows to level 3, her ponytail comes down and she wears her hair down. She wears a green outfit with vines on top of it, making her look like an elf.

Mel is cheerful and acts without malice. She is optimistic, believing that Chinatsu would have no problem on winning despite losing a few times. However, later it is shown that she is also quite manipulative, preventing Chinatsu from making up with Suzuko by stating that Chi-chan has already made up her mind and that she has no intention of changing it because that would her make her weak.

It's possible that Mel's personality became manipulative because she is based on Chinatsu's perception of Suzuko (as Chinatsu considers Suzuko to be quite manipulative) and as a result Mel may've inherited many of the traits that Chinatsu believes makes up Suzuko.

Mel is an LRIG that was created from Chinatsu's memories of Suzuko. As such she has many of Suzuko's mannerisms.

Initially, Mel is unable to stress the importance of Selector battles, which results in Chinatsu losing a lot of times. It's highly likely that unlike Ril, Mel did not explain the rules of the game well enough to Chinatsu or that Chinatsu wasn't taking the game seriously at the time as she kept on saying and thinking that the results don't matter and that it's better to just quickly get the battles over and done with. It also didn't help that Chinatsu avoided talking or studying about WIXOSS because she chose to focus on school.

Furthermore, during their battles, Mel kept asking whether Chinatsu would want bet her coins to activate her "Berserk" ability. Chinatsu kept refusing to do since she viewed it as dishonorable and would rather win with her own power. In the end, she manages to make Chinatsu bet her coin once, by making her Selector realize that she will lose everything if she didn't do so.

Later on, Mel starts getting more manipulative with Chinatsu using clever wordplay to convince Chinatsu to do things that she'd normally never do (e.g. saying that Chinatsu would never back down in order to get Chinatsu to renew her resolve to erase Suzuko stating that it would make her look weak if she backed down now and that Chinatsu would never do that) as well as when she convinces Chinatsu to hand in Shohei's contract to the Bookmaker. Mel also plays on Chinatsu's loneliness by acting as Chinatsu's only friend in the world to also convince Chinatsu to do stuff.

Mel is Chinatsu's LRIG. Mel affectionately calls Chinatsu "Chi-chan" and kept calling her despite Chinatsu brushing her off by telling her not to call her that. 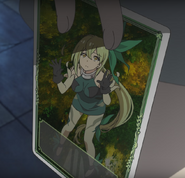 Retrieved from "https://wixoss.fandom.com/wiki/Mel?oldid=75843"
Community content is available under CC-BY-SA unless otherwise noted.