She has a rather teasing personality and will offer her own little quips whenever prompted. Though she doesn't get why memories are so important to humans. In truth, she is really sadistic, reveling in Hanna's despair when she gets her memories back.

Nanashi was an LRIG created from Hanna's memories, specifically Hanna's desire to remember her repressed memories of the day that her brother Yuuto died. At the end of Lostorage incited WIXOSS, Nanashi went back to Mayu's White Room and disappeared after Hanna won all five of her gold coins.

In Lostorage conflated WIXOSS, Nanashi reappeared when she got summoned back to be Hanna's LRIG again, during the third round of Selector Battles.

She fights alongside her Selector Hanna Mikage in the Selector Battles.

After Hanna wins all 5 gold coins, Nanashi returns Hanna her memories of that day when Yuuto died; in truth, Hanna was partially responsible for her brother's death, as she led him into the building under construction where he died. After Hanna wakes up back in the ruins of Mayu's white room, Nanashi then reveals her true sadistic self stating that she's been waiting for this day for so long, and stating how wonderful Hanna's despair-filled face is. She then goes back into Hanna's body.

Nanashi is Hanna's LRIG. Nanashi often teases Hanna and calls her "Hanna-sama", which annoys Hanna, although she has confidence in Hanna's abilities. Nanashi is secretly sadistic, and she revels in Hanna's despair as she returns her memories of Yuuto's death to her. Despite this, their relationship remains amiable in conflated, as Hanna has since come to terms with her brother's death, which somewhat disappoints Nanashi. 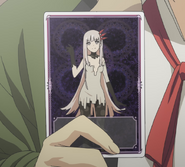