For the card, see Peeping Analyze.

selector infected WIXOSS -peeping analyze- is a manga spin-off of selector infected WIXOSS anime series. The story concept is written by Mari Okada, and the illustration is handled by Manatsu Suzuki, serialized on Shueisha's Ultra Jump. The prologue "Episode 00:" was serialized on the August 2014 issue, and the actual story began on September 2014 issue.

The story's first few chapters revolves on a Selector and LRIG pair, Kiyoi Mizushima and Remember. Before it evolves around Piruluk and her adventure as LRIG, who meets Akira Aoi, and her new Selector, Amika Hashimoto that looks like Ayumi Sakaguchi, her only friend. 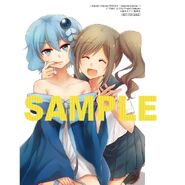 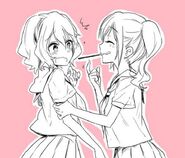