Rate my deck in the comment section to a skale from 1 to 10.  Feel free to give me some constructive criticism. Note that WEBXOSS is an online automatic simulator and not all the cards are in the game, the last update was from WX11. 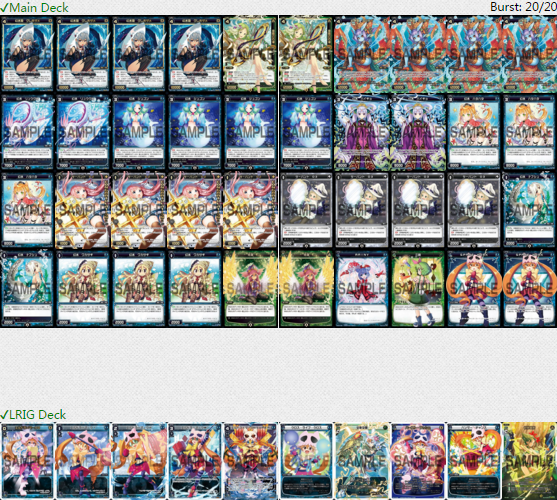 In the early game I focus on drawing cards from my deck, preparing traps on my Life Clothes. When you grow Eldora to level 4 you must have 3 SIGNI's on the field (Gurehozame, Arowana and Dugong).

And finally, I will attack with Eldora×Mark IV SUPER and I will activate her effect preventing my opponent to activate a Life Burst.

I can activate Twists and Turns and I will banish my opponent's SIGNI's with over 12000 power, I can add from the cards I neet from my Ener Zone into my hand or I can put the top card of my deck into my Ener Zone.

Retrieved from "https://wixoss.fandom.com/wiki/User_blog:Rider_of_the_Black_Astolfo/Eldora_Deck_Profile_(made_for_W_E_B_X_O_S_S)?oldid=49683"
Community content is available under CC-BY-SA unless otherwise noted.