WX-01 Served Selector is the first booster set in the WIXOSS TCG.

Served Selector introduced the game of WIXOSS alongside the pre-built White Hope, Red Ambition, and Blue Appli decks. It is also the initial appearance of many Green cards.

The set contains alternative Level 1 through 3 LRIGs with abilities, along with new Level 4 LRIGs for Tama, Hanayo, and Piruluk. It is also the first TCG appearance of the Green LRIG Midoriko (outside of promotional level 0 printings) until her Green Wanna deck is released later.

The set also builds on the Arm, Gem, Ore, and Electric Machine SIGNI classes from the starter decks with more support, including introducing the leader figures of each class (with the exception of Ore). 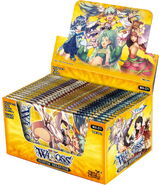 Retrieved from "https://wixoss.fandom.com/wiki/WX-01_Served_Selector?oldid=93301"
Community content is available under CC-BY-SA unless otherwise noted.