WX-03 Spread Selector is the third booster pack of the WIXOSS TCG.

Spread Selector is the supplementary booster set, featuring a notably smaller pool of cards compared to its predecessors. The set is said to have a primary focus on Black support. It also features collaborative works, including Transformers and some of the selector infected WIXOSS anime's staff members.

Spread Selector is the first appearance of the black LRIG Umr.

It instead has a wide but shallow support for Angels, Arms, Weapons, Gems, Electric Machines, Earth Beasts, Plants, and Ancient Weapons. 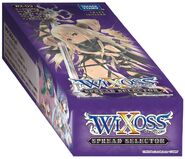 Retrieved from "https://wixoss.fandom.com/wiki/WX-03_Spread_Selector?oldid=88753"
Community content is available under CC-BY-SA unless otherwise noted.