WXDi-D02 DIVA DEBUT DECK Nijisanji ver. Sanbaka is the forty-second preconstructed deck of the WIXOSS TCG. It is also scheduled to be one of three sets scheduled for release later in 2021 alongside WXDi-D01 DIVA DEBUT DECK ANCIENT SURPRISE and WXDi-P00 INTERLUDE DIVA, officially introducing the WIXOSS TCG to English language players.

The package contains 59 cards, more than what is needed to construct a WIXOSS deck; the player is meant to choose which of the three LRIGs they want as their center LRIG, and choose their center and assist LRIGs based on that. In the english version of this deck, the assist version of Lize and center versions of Toko and Ange are removed leaving the deck without this feature. 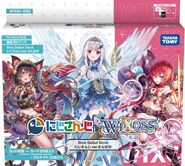